Welcome, it's a pleasure to meet you here at HATACHANA – The Station!

For over half a century, between the years 1892 and 1948, the station docks were crammed by hundreds of thousands of passengers and goods, on their way from Jaffa to Jerusalem and back again. Today, HATACHNA – The Station welcomes mainly visitors who stop by and want to feel, at least for a moment, that they are part of the journey between then and now.

Whether you are looking for some fun times with your family, or if you just want to take a small break from your everyday routine, at HATACHANA you will find: historic 19th century buildings alongside trendy galleries and shops; festivals, parties, concerts and cultural events for any mood and every age; restaurants, bars and cafés; and there is even an adjacent parking-lot at discount prices.

Come for a visit! We won't set off on our journey without you…HATACHANA is part of the Atarim Group that manages and develops urban tourism and cultural sites along the Tel Aviv-Yafo coastline. Learn more about Atarim. 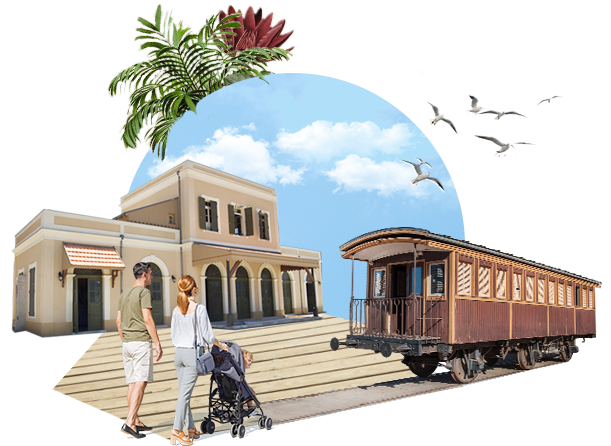 Philanthropist Moshe Montefiore works vigorously to develop Eretz Yisrael: The Land of Israel, only to find it is no easy endeavor, and that there are no trains about for the transportation of machinery and raw materials. An experienced English train engineer, who joins Montefiore’s 5th visit to Palestine, claims: a railway line between Jaffa and Jerusalem is possible, but it would be frightfully expensive. The idea is abandoned. 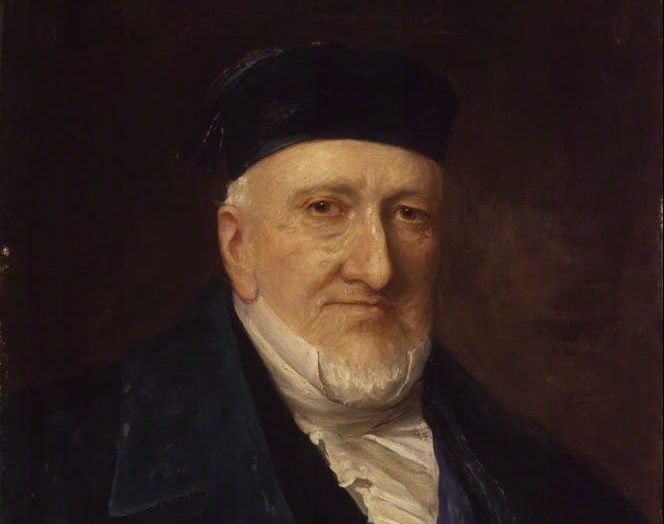 The pilgrimage movement to the Land of Israel is growing; more and more believers arrive at the ports by ships. Yosef Navon, a Jewish entrepreneur from Jerusalem with Ottoman (Turkish) citizenship, recognizes the economic potential that lies in the development of a railway line from Jaffa to Jerusalem, which would transport pilgrims to the Holy City. He approaches the Ottoman Sultan Abdul-Hamid II, requesting a concession to construct the line. The Sultan grants Navon a 71-year franchise to build and operate a narrow rail line between Jaffa and Jerusalem, in exchange for 5,000 Ottoman Liras in collateral, and a commitment to construct two additional lines. Navon – who was, true to the Hebrew meaning of his name, wise – sells the franchise to a French company for one million French Francs.

On March 30th, a ceremony, celebrating the beginning of works to construct the railway route, is held near Mikveh Israel. The “Jaffa” railway station is built to the east of the Menashiya neighborhood, and in order to lay down the tracks for the line to Jerusalem, a kind of valley or basin is being dug out on the southern end of the Neve Tzedek neighborhood; in it the tracks are laid, and above it runs the “Chelouche Bridge”.

On September 26th, the inauguration of the railway line from Jaffa is held at the German Colony in Jerusalem, attended by a distinguished delegation from Kushta (Constantinople/Istanbul) and some 150 invited guests. The rail track was 86 km long and 100 cm wide, and during its first years of operation, travel time lasted about 6 Hours. First-class passengers, who enjoyed luxurious cabins, paid 50 grush (cent), and those who had to settle for second-class travel, paid 30 grush.

A guest of honor on the first train in Eretz Yisrael! Theodor (Binyamin Ze’ev) Herzl travels on the train from Jaffa, to meet Emperor Wilhelm II in Jerusalem.

The German Wieland family of the Templar community arrives in Palestine and establishes its residence and livelihood close to the train station. The family’s Patriarch, Hugo Wieland, builds a two-story villa, in which generations of the family will be living until the mid-1930s (except for the years 1917-1922, during which the family was exiled to Egypt by the British). Next to the family home, Hugo Wieland establishes the first cement factory in the Land of Israel.

After World War I breaks out, the Turks declare the railway track to be enemy property and confiscate it from the French company. The tracks themselves are dismantled and transferred to the railway line to Be’er Sheva. After the war, the British, who conquered the land, lay a rail track between Lod and Jaffa, along Boutros Street (currently: Raziel Street) and the Jaffa Clock Tower Square. 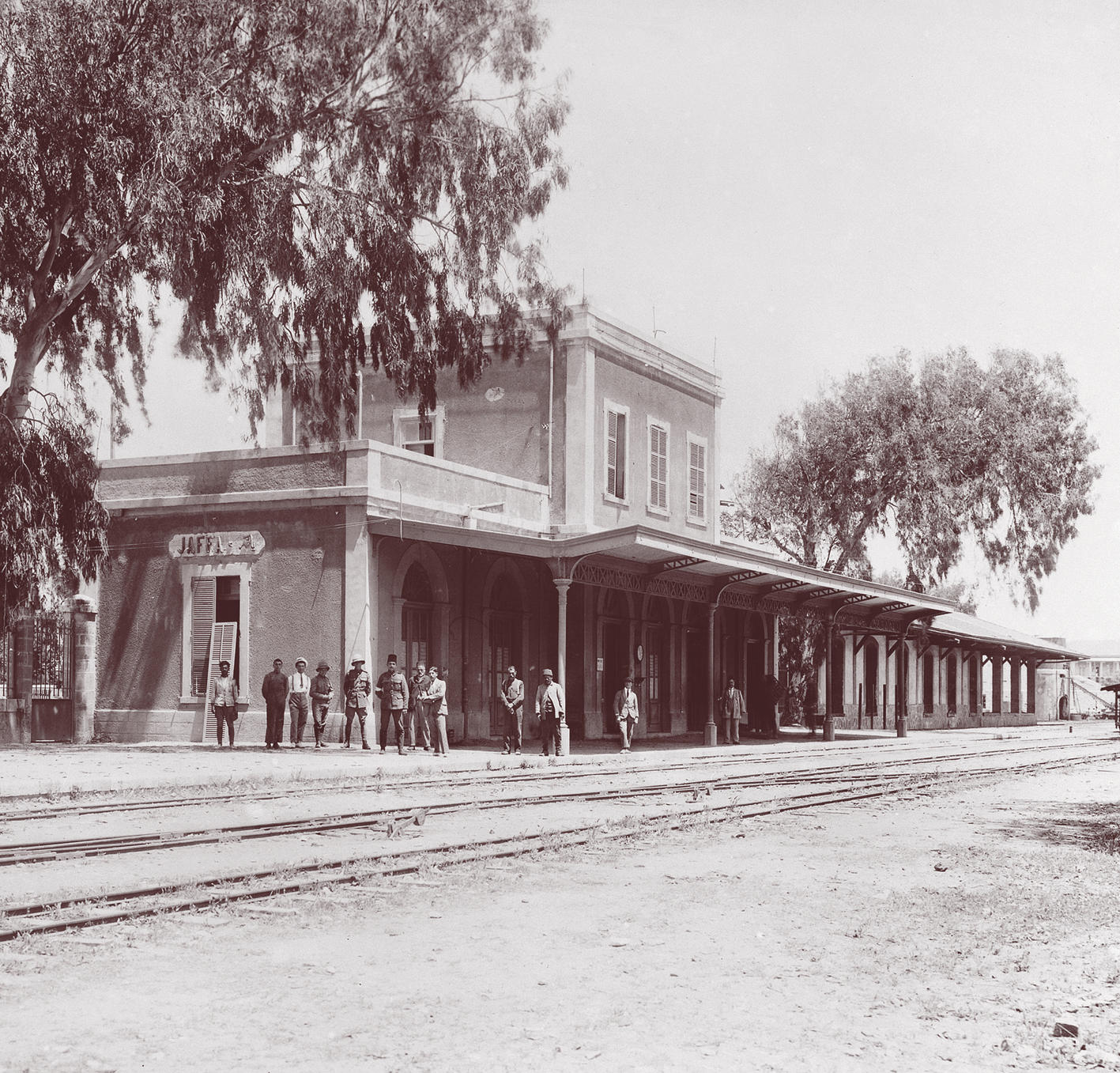 The fame of the Jaffa Station fades following riots and pogroms in the area. With the outbreak of World War II, Palestine becomes the rear garrison of the British Army, and new emergency garages and train workshops for military uses are set up at Jaffa Station.

Sabotage by the Zionist underground organizations results in the termination of activity of the train line, which has not been renewed since. The area of the Station and the Wieland compound are assigned for the use of the IDF.

At the beginning of the 21st century, the Israel Land Administration allocates the Station area to the municipality of Tel Aviv-Yafo. Ten years later, following the completion of extensive conservation and development works on site, HATACHANA – The Station opens to the public, as a site of recreation and leisure. 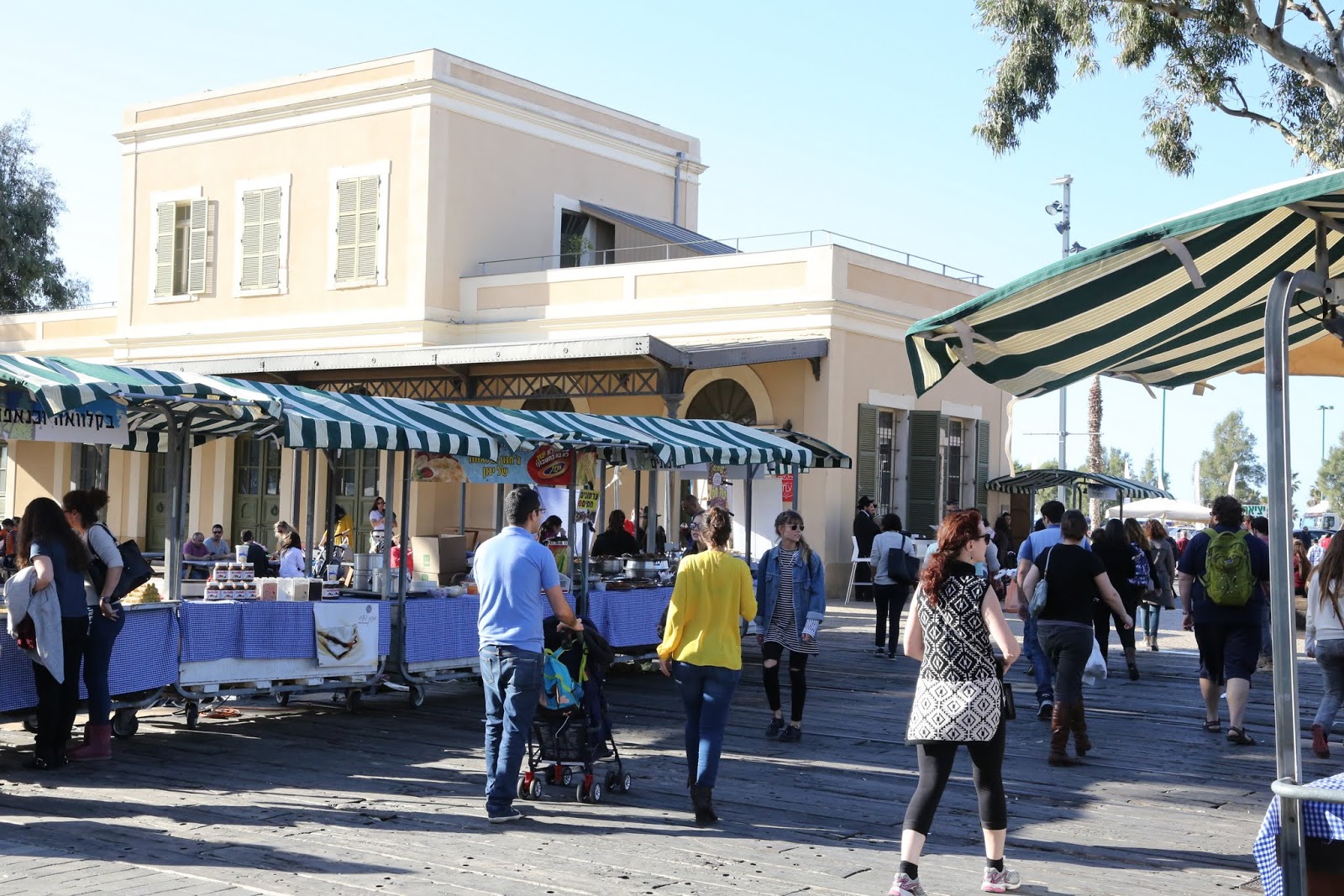